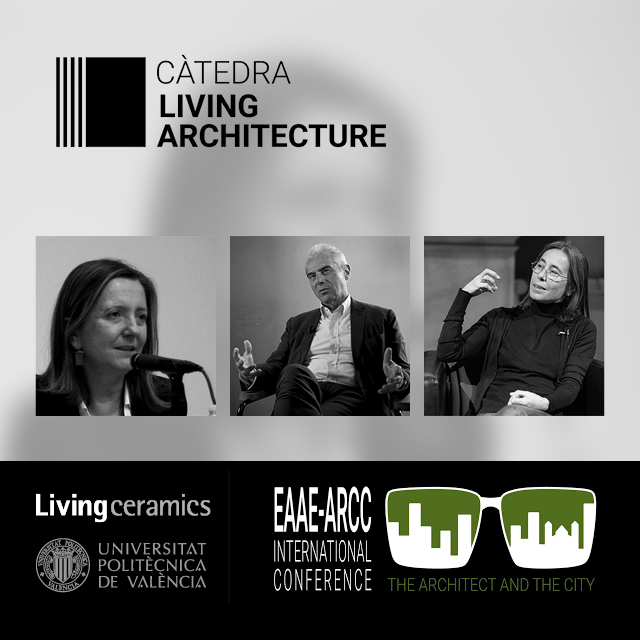 Livingceramics at the World Architecture Congress 2020

From the 11th to the 14th November, Valencia is to become the international headquarters of design and architecture by hosting the World Architecture Congress, with this year’s focus “The architect and the city”. This biennial conference is organised by the EAAE (European Association for Architectural Education) and the ARCC (Architectural Research Centers Consortium) alongside the UPV (Polytechnic University of Valencia).

Livingceramics is also taking part in the event through the Living Architecture Chair. This programme supports and develops academic, cultural and research activities dedicated to architecture students.

With a view to providing the education of future architects with value, Livingceramics is sponsoring the lectures taking place at “The architect and the city” being given by leading figures in the world of architecture: Beatriz Colomina, Alessandro Balducci and Carme Pigem. These discussions are designed to promote good living conditions for future generations around the world and to ensure we look after the planet.

Keynote Lectures at the EAAE-ARCC International Conference 2020 by leading architects:

Topics will cover cities as an architectural subject, as the setting of new social trends, and how the role of architect is key to designing and managing them. This is particularly relevant when you consider the world’s growing population and the noteworthy migration to urban areas.

· Beatriz Colomina, with the lecture “The Bed and the City in the Age of COVID-19”. Architectural historian and theorist, Beatriz Colomina has written extensively on architecture, art and technology. She is the Founding Director of the Interdisciplinary Media and Modernity Program at Princeton University and a Professor and Director of Postgraduate Studies at the School of Architecture.

· Alessandro Balducci, with the lecture “Re-starting from physical space to cure the problems of the urban”. This architect and town planner is a professor at the Polytechnic University of Milan for Urban Planning and Policies, and he has successfully managed projects such as the Strategic Plan for the Province of Milan developed between 2004 and 2008.

· Carme Pigem Barceló, with the lecture “Intensities”. A Spanish architect, she was one of the first women to be awcarmearded a Pritzker Prize, which she won through her RCR Arquitectes studio. Her architecture is notable given its focus on the place, materiality and the user experience. Since 2005, she has been a guest lecturer in the Architecture Department of the Swiss Federal Institute of Technology (ETH Zurich).

This event acts as a meeting point for those who research cities, as well as a lecture and debate platform for studies, findings, news and contributions. The conference is dedicated to current architects as well as future architects who are determined to carry out research in architecture or similar fields, and Livingceramics is proud to be able to participate in the event.

Living Ceramics presents the winner of the second edition of the Life is for Living Awards.